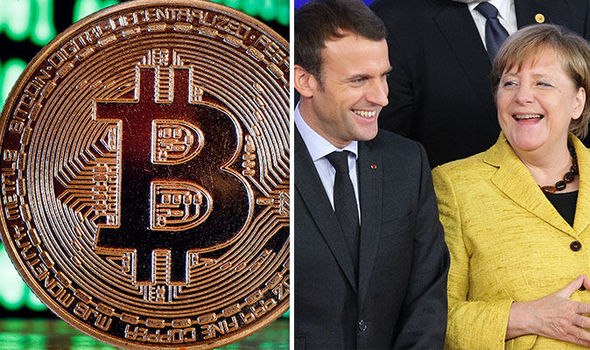 France and Germany’s finance ministers have agreed to launch a joint crackdown on the cryptocurrency markets as countries begin to push back against the bitcoin boom. Mark Wilson, the CEO of insurance company Aviva, said that cryptocurrencies face a “blizzard of regulations” in the coming weeks.

Speaking to CNBC, Mr Wilson said cryptocurrencies presented a threat to country’s sovereignty and predicted that severe regulation was inevitable. This comes as Emmanuel Macron and Angela Merkel are set to launch a joint clampdown on trading cryptocurrencies. French Finance Minister Bruno Le Maire said yesterday that the two countries will make joint proposals to regulate the bitcoin cryptocurrency at the next summit of the G20 group.

The European Union has previously proposed treating‎ cryptocurrency markets as a security threat linked to criminal ‎laundering and terrorists.‎ The Aviva CEO explained: “One of the keys to sovereignty is control of currency and tax. “Cryptocurrency interferes with both of those, so it’s inevitable there will be regulation. It is as inevitable as snow in Davos.”

He added: “A lot of central banks and regulations are working on bans and regulations around the world. “China has already taken action and banned it. Other countries will follow. They must regulate. “You have to keep the Treasury in the countries satisfied and keep consumers safe.”

Anticipating the push back from European governments, bitcoin, the world’s biggest cryptocurrency, fell to half its record peak of almost $20,000 in recent days. China, which has already banned cryptocurrency, has urged banks to “enhance their daily monitoring” to completely eliminate the trading.