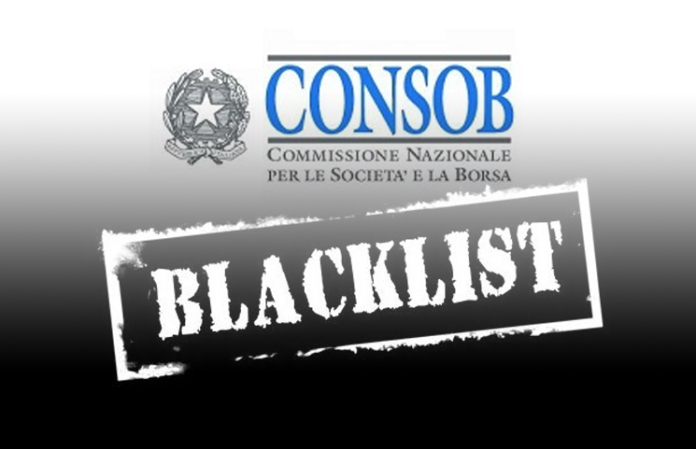 Italy allows crypto firms to operate within its jurisdiction. However, these companies must wait until they are formally given the go-ahead by CONSOB, which is the financial markets regulator in Italy.

The regulator gave a warning on Monday that put on notice a list of firms that were illegally engaging in crypto-related market activity without regulation. Most of them were engaged in the promotion of various financial products, including those related to crypto.

CONSOB updated its blacklist with binary options and FX companies being included in the list. The list also includes names of firms involved in crypto. The service could be as an underlying coin or as a related derivative such as a CFD. The regulator in Italy said that brokers listed were offering the crypto trading services without proper regulatory approval.

Thus far, Italy has not created any specific laws that govern the crypto field. The nation’s regulator only defines crypto as it relates to AML laws. Thus, the regulator classifies crypto as a digital representation of value that is not issued by any public authority or a central authority. It goes on to state that crypto is not linked to any legal currency but is used as a medium of exchange for buying services and goods. It can be electronically stored, transferred, and traded.

However, the ministry of finance has been working to create crypto regulation. It has been consulting on reporting and registration rules for the blockchain sector. The draft bill will require crypto exchanges to report what they do to the regulator. The measure is in addition to a May 2017 decree.

On January 23, Italy released an amendment for regulation of the blockchain sector. Two Senate committees approved this amendment. It is the first time that the government has made a meaningful effort to regulate the industry. This amendment now allows the use of blockchain-secured data in time stamping official documents.

However, this amendment will still need more approval before it can become law. Although it is the first major legislative move in Italy, the government has had an interest in blockchain tech for a while now. In December 2018, the government published a list of 30 blockchain experts. These experts would provide advice to the government on a national strategy for the blockchain and the distributed ledger.

Italy is also part of the European Blockchain Partnership. This group wants to improve the standards and security of this sector. It is also amongst the EU member states that signed a declaration in support of the blockchain.

It does appear that Italy has a genuine interest in gaining a foothold in the blockchain sector. However, the nation is way behind nations such as Malta and Switzerland that have made giant strides in this sector. The nations have made these strides despite the fact that they are relatively small. They have already established themselves as blockchain industry hubs where people from all the world flock.